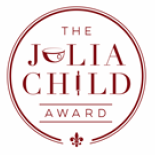 WASHINGTON, D.C. (June 02, 2021) – Today, The Julia Child Foundation for Gastronomy and the Culinary Arts announced multi-award-winning food journalist, historian, author and recently named PBS host Toni Tipton-Martin as the recipient of the seventh annual Julia Child Award. Tipton-Martin will receive the Award on November 4th, 2021 at the Smithsonian’s National Museum of American History in Washington, D.C., the home of Julia Child’s kitchen. The Award is accompanied by a $50,000 grant from the Foundation.

“Toni Tipton-Martin is a transformative leader in the culinary world. Her commitment to highlighting the depth and importance of African American cuisine and of making the industry more inclusive through research and education led the jury to select her as this year’s Julia Child Award recipient,” said Eric W. Spivey, Chairman of The Julia Child Foundation for Gastronomy and the Culinary Arts. “Toni also shares many qualities and accomplishments with Julia, including a pioneering spirit—best reflected in her groundbreaking cookbook—and a belief in the power of food to bring people together. Both Toni and Julia have also been hosts of beloved PBS cooking shows.”

The jury has recognized Toni for her work as a writer, editor, academic and food justice warrior. Toni has long championed the study, appreciation and awareness of African American cuisine and inspiring that community particularly to eat and cook healthier.

Former First Lady Michelle Obama invited Toni to the White House twice for her work to help families live healthier lives, and in 2014 she earned the Southern Foodways Alliance John Egerton Prize for her efforts. Toni has appeared as a guest judge on Bravo’s Top Chef; was featured on CBS Sunday Morning’s annual “Food Show”; and published in Best Food Writing of 2016. She has been a featured speaker at the Library of Congress, and many universities.

In 2008 Toni founded The SANDE Youth Project as a grassroots outreach to improve the lives of vulnerable families. SANDE presented an after-school cooking program for elementary school age kids; invited high school culinary students to cook at the James Beard House; created the Children’s Picnic, a free, annual healthy food festival for families; and provided networking opportunities for young food professionals through Soul Summit, the first symposium dedicated to African American foodways. SANDE, will use the $50,000 Julia Child Award grant to focus its mentoring and training activities on next generation food writers.

“In The French Chef Cookbook, Julia wrote that she wanted to ‘take the bugaboo out of cooking.’ I had a similar hope,” said Toni Tipton-Martin. “I wanted my work to reclaim African American kitchen wisdom and make our cooking more accessible. It is in this same spirit that I look forward to using The Julia Child Award grant to inspire the next generation of food writers and chefs.”
The Julia Child Foundation for Gastronomy and the Culinary Arts is one of the leading grant-giving private foundations solely dedicated to supporting the field of gastronomy and the culinary arts. The Foundation established the Julia Child Award in 2015 to foster Julia’s legacy, while also honoring an individual (or team) who has made a profound and significant difference in the way America cooks, eats and drinks.

About The Julia Child Foundation for Gastronomy and the Culinary Arts

The Julia Child Foundation for Gastronomy and the Culinary Arts was created by Julia in 1995 and became operational in 2004. Its mission is to honor and further Julia’s legacy, which centers on the importance of understanding where food comes from, what makes for good food, and the value of cooking. Headquartered in Santa Barbara, California, the Foundation is a non-profit which makes grants to support research in culinary history, scholarships for professional culinary training, food writing and media as well as professional development and food literacy programs. Since becoming operational, the Foundation has made more than $2.5 million in grants to other nonprofits. For more information, visit: juliachildfoundation.org.

About Food History at the National Museum of American History

Through research, programs, and collections, the Smithsonian Food History project at the National Museum of American History welcomes everyone to participate in exploring the history and ongoing significance of food cultures in the United States. By engaging in activities and conversations about food history, Museum audiences will gain a greater understanding of the roles they play, individually and collectively, in shaping the future of food production, distribution, and consumption. In addition to its foundational exhibition, “FOOD: Transforming the American Table,” the Museum has developed a diverse menu of programs and demonstrations that bring audiences together, virtually and in person, for relevant discussions that start with history and expand to the present and future of American food. As the home of Julia Child’s kitchen for 20 years, the National Museum of American History is committed to examining the impact of food, drink and agriculture on American history. The culmination of the museum’s food history offerings this year will be a hybrid event hosted by the museum Nov. 4 that will accompany the presentation of the 2021 Julia Child Award by The Julia Child Foundation for Gastronomy and the Culinary Arts. More details to be released later this summer. Join us around the table and learn more at http://s.si.edu/FoodHistory. Most of the Smithsonian museums have recently reopened. For more information, visit http://americanhistory.si.edu.